Domů » Extra články » The Men Who Stare at Goats

The Men Who Stare at Goats 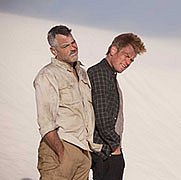 Each of us deals with a life crisis in a different way. Some of us might change our appearance, take up a new hobby or find religion. When journalist Bob Wilton’s (Ewan McGregor) wife leaves him, Wilton decides to go to Iraq to cover the war and so prove his wife that he is a pro, a real journalist.

While at a hotel in Kuwait awaiting permission to enter Iraq, Wilton introduces himself to a stranger at the next table. He recognises the man’s name, Lyn Cassady (George Clooney), from an interview he did earlier…

The whole article: The Men Who Stare at Goats (pdf)