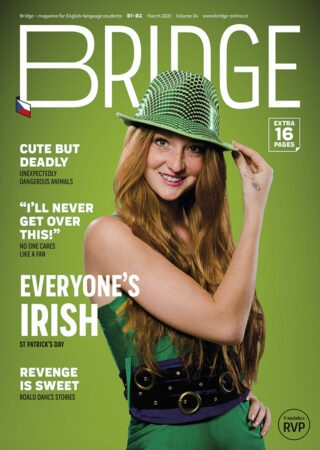 Cooliosities
ELECTRO(MAGNETIC) MUSIC
1B, 2F, 3G, 4E, 5C, 6D, 7A
MUSHROOM BOAT
1 replace, 2 much, not, 3 can / could, 4 Although
DAYLIGHT ROBBERY
1 to work out, 2 to negotiate, 3 to snatch, to grab
WHO’S A GOOD DOG?
Sample answers:
The ambulance was followed by Senturk’s dog Boncuk.
The animal was taken home (by Senturk’s daughter).
Boncuk was taken home again (by Senturk’s daughter).
The journey across the city was made by Boncuk.
The local press was told by a hospital security guard: “She comes…”
When the door is opened, she pokes…